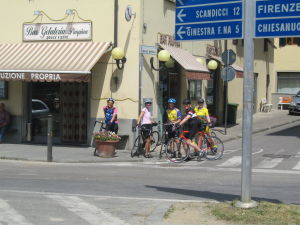 .....Green Roads of Tuscany was a Bicycle Club Adventure Tour organized and led by Americans.  It was a two trip starting and ending in Florence that went south to and past Siena in the chianti wine region of Tuscany.  The routes were outstanding, food mostly good andhotels mostly good.
.....The #1 reason I went was to ride in a scenic area.  The tour definitely fulfilled my high expectations.  Most roads were one scenic view after another since most of the trees were cut to plant vineyards and olive groves.  Sometimes we rode through the woods, which offered a pleasant change.  Larry suggested that the best views of the valleys were from about halfway up the hill.  Views to hilltops were best from hilltop.  Remember Tuscan town were built on hill top for defenses.  Almost all the roads were free of traffic and potholes.  Besides maps & cues routes were provided as gpx files, so I used my gps to navigate around Tuscany.
.....The #2 reason I went was food.  We were never disappointed at alimentari/pasticceria shop with the espresso or dolces.  Our first alimentari/pasticceria served me a small lemon pie(4" diameter) covered with custard.  It was so rich that I needed more than one caffe latte to get it down.  Every restaurant along the route gave us good to outstanding food.  Often the cost of the entree was price of the entire plate.  For instance I had a third of a pound of veal plus veggies for Eu6.  For fine veal in the US I pay $17 a pound.
.....Group meals included in the price of the tour left a lot to be desired.  Some meals included almost no entree as in one or two ounces of meat or fish, some were American thin crust pizza and unfortunately I grew up on Chicago deep dish pizza where the dough was covered in sausage before adding tomato and cheese.  At half the group dinners and half the breakfasts coffee was a drink especially prepared for Americans - diluted americanos or instant coffee.
.....The 3# goal of the trip was hotel rooms with two comfy beds, plenty of hot water, and quiet odor-free.  Every room did have plenty of hot water.  However, two comfy beds, quiet and odor-free were on occasion elusive.
.....The bike rental report is a saga that has finally ended.  It began with the nearest tandem rental being an hour away, to the rental provider taking back his bikes at the beginning of the tour, and concluding with a two day refund being issued to the rider of a bike that failed mechanically.  For a few minutes on the first day of the tour my cycling vacation was being taken without a bicycle.
.....BAC tours are known for being inexpensive, but sometimes inexpensive gets confused with cheap.  BAC members often do not require the services of touring companies.  One rider offered the suggestion to add a couple of hundred dollars to the cost to fix the shortcomings of #2 and #3.  Putting another $200 into meals, espresso, rooms, bottled wine . . . , would have increased the tours value by $500.